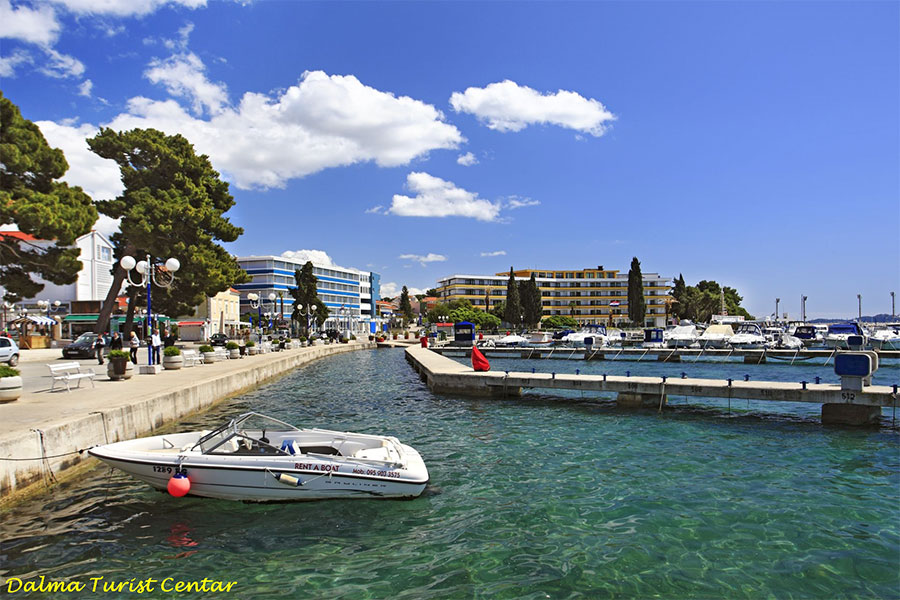 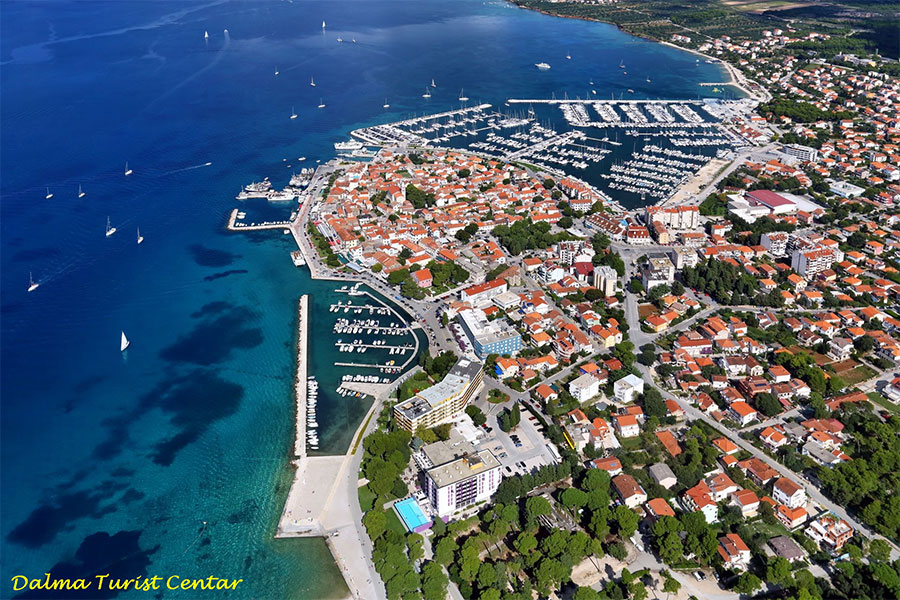 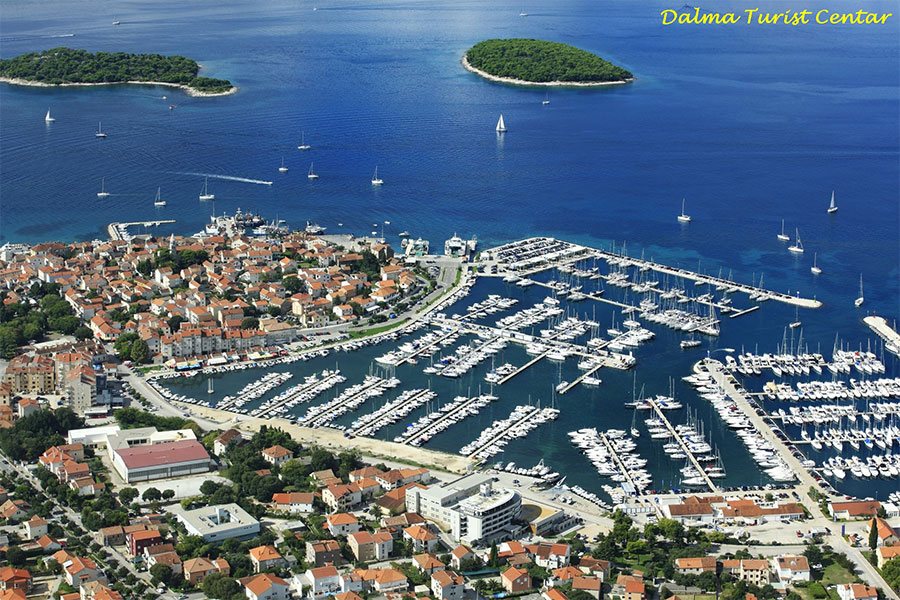 Biograd is known as tourist centre and as Croatian city it was mentioned in 10 th and 11 th century as the seat of Croatian rulers, whereas in 1102 Koloman was crowned Croatian-Hungarian king there.

Once a coronation city of Croatian kings, today is Biograd an important and verymodern tourist centre and core of waterfront with identical name. Renowned hotels, modern marines, tourist resort, motel, comfortable private accommodation, as well as campsites in the town and its environs offer a possibility of selecting the best accommodation according to your choice…

Rich and diverse cultural and service offer of the city shall make your stay even more pleasant and exciting. Interesting geographic position offers numerous advantages. Since the city is situated on threshold of Kornati islands, Biograd na moru is an ideal port for boaters. Lake Vransko jezero, which is only 7km away, attracts fishermen, andthe channel of Pašman with its numerous small wooded islands is ideal for navigation and various sea sports.

In the very vicinity of the city there are further three national parks: Slapovi Krke (falls of the river Krka), Paklenica and Plitvice. There is an airport nearby (20km), railway station in Zadar and Benkovac (19km), as well as good bus connections, which make Biograd na moru a perfect place for stay, with important tourist destinations of Croatia being most near. 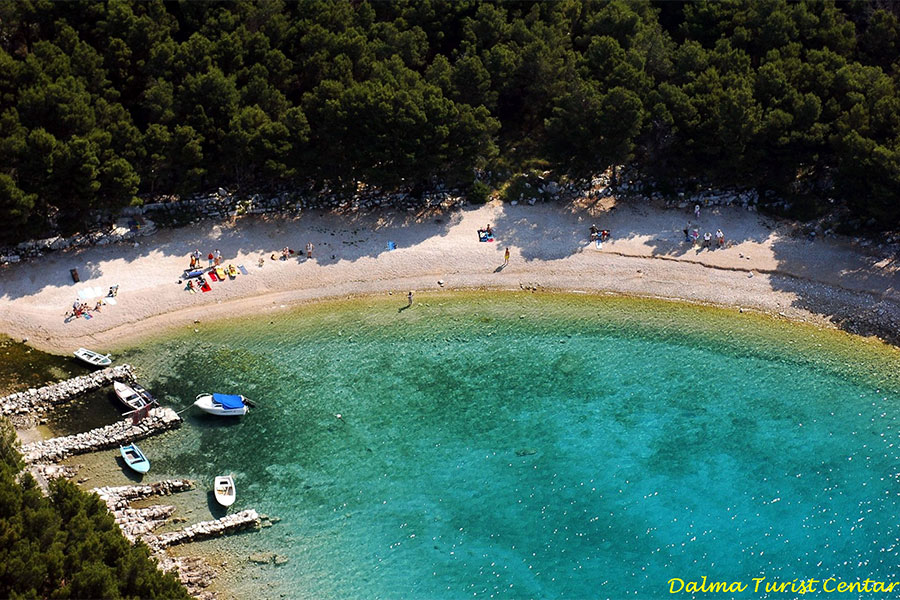 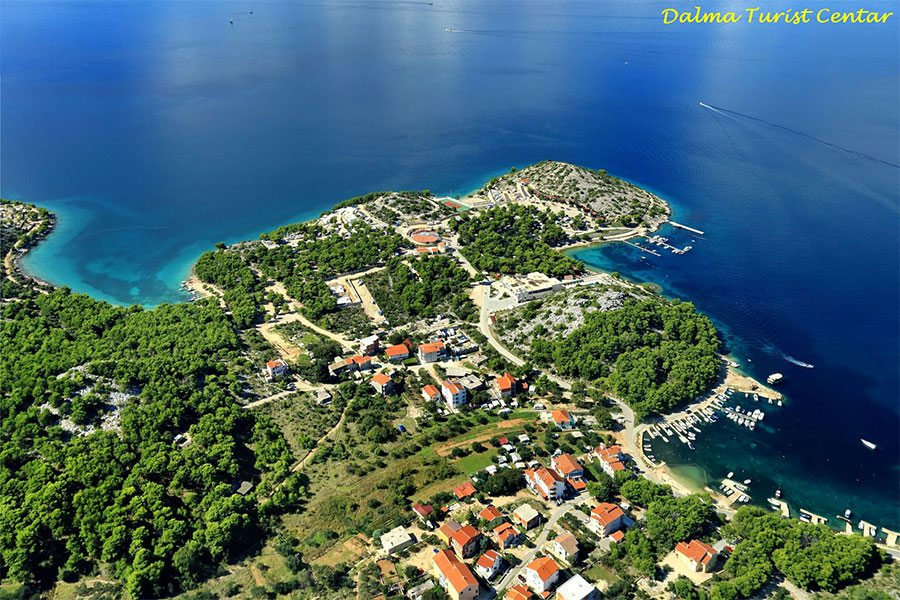 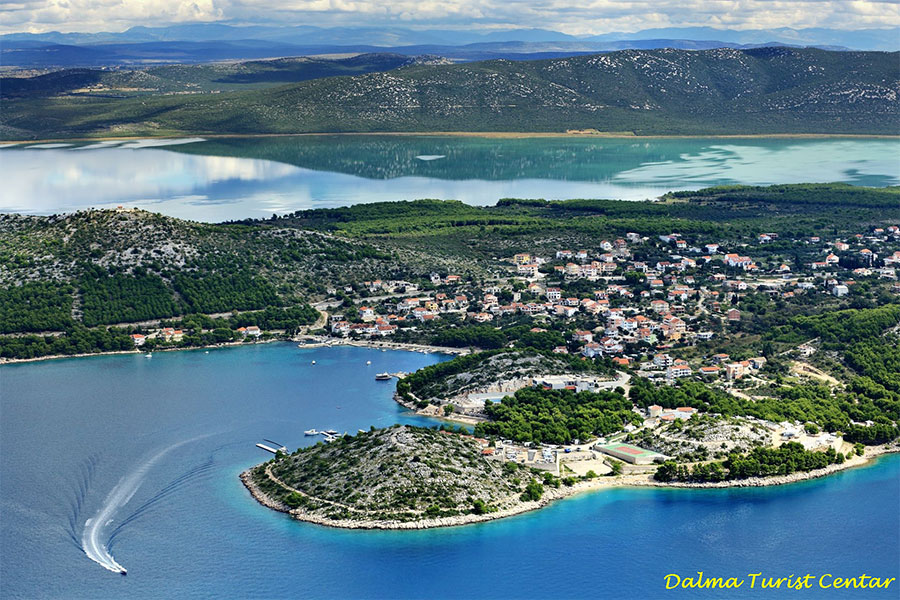 Drage is a small Dalmatian place by the sea, in the vicinity of Pakostan. You can reach Drage by boat, since there is a port in the town. Above the town there is a viewpoint Celinka, with a beautiful view of the island Vrgada, Kornati, Drage, Pakostane and Vrana Lake. 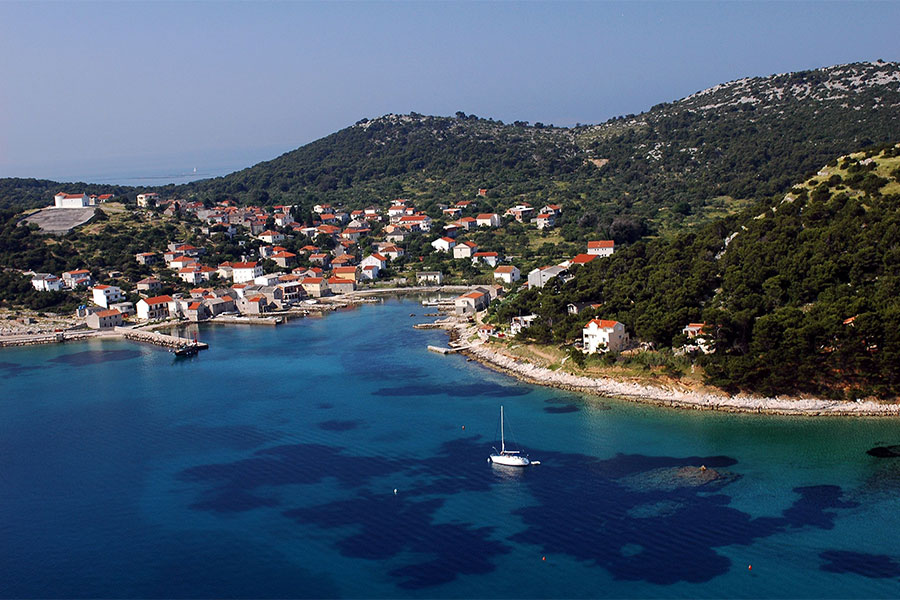 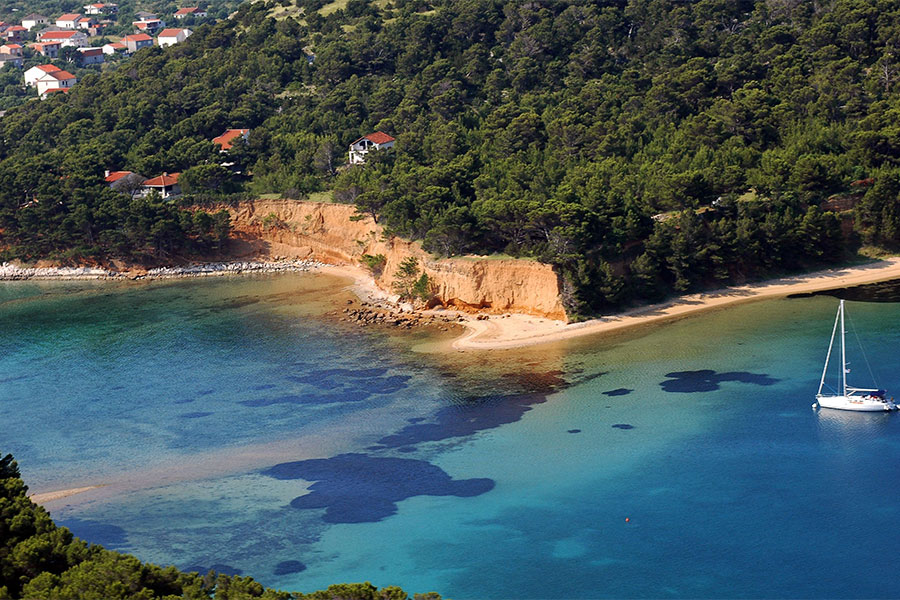 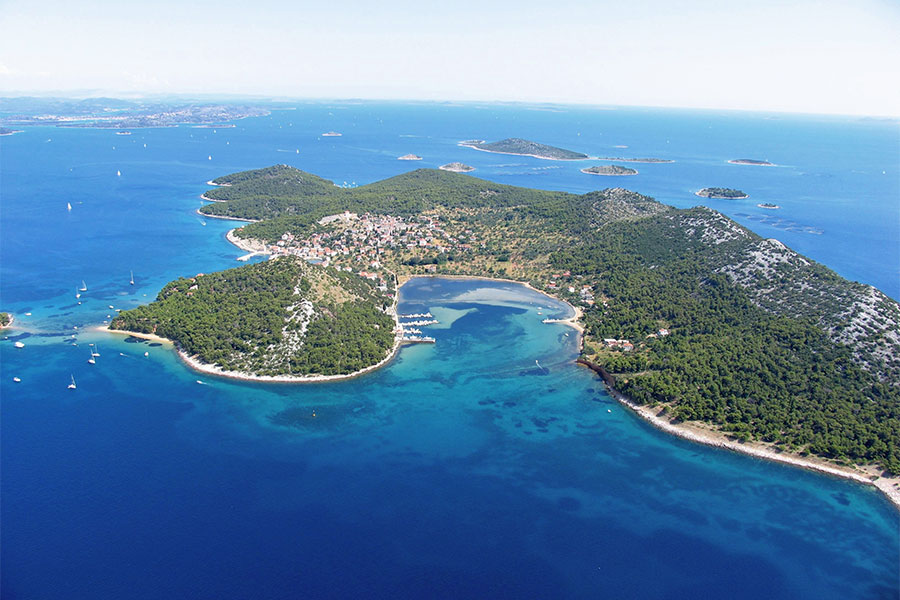 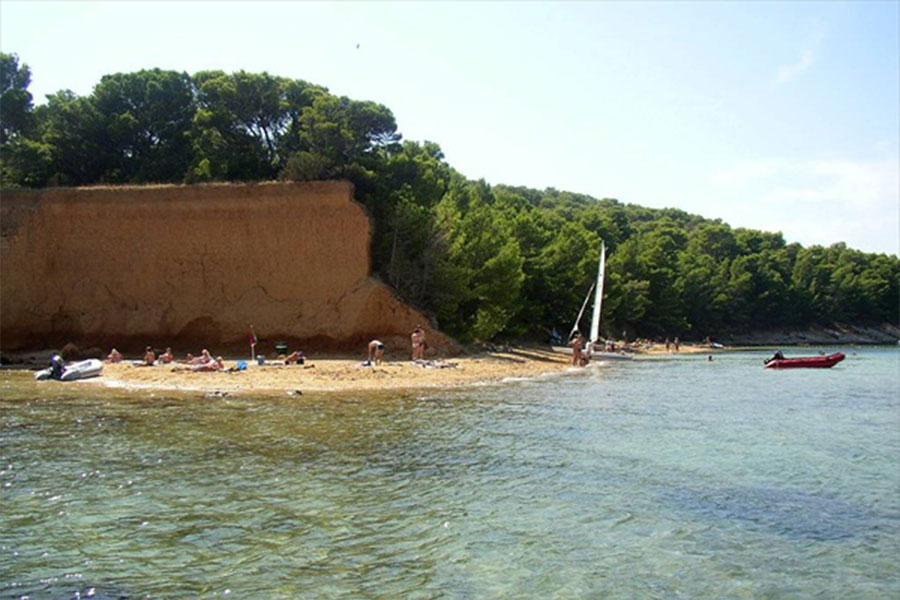 Vrgada is one of the smallest inhabited Croatian islands. Vrgada is completely covered by pine trees, and on its north side, a long sandy beach of red sand stretches, which is definitely worth a visit. You can also take a stroll in the place itself, enjoying the narrow cobbled streets and unique sense of distance from civilization, without the cars and the usual summer crowds. 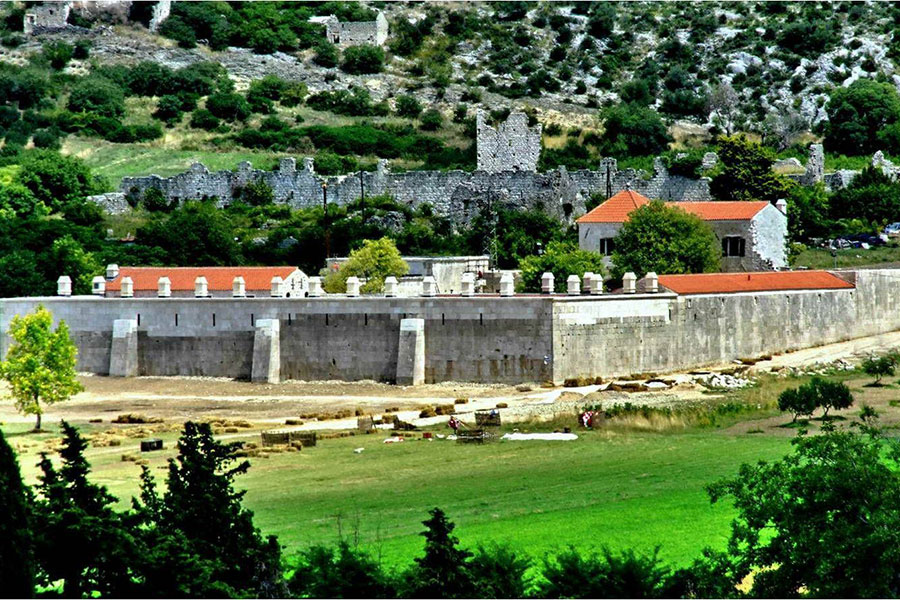 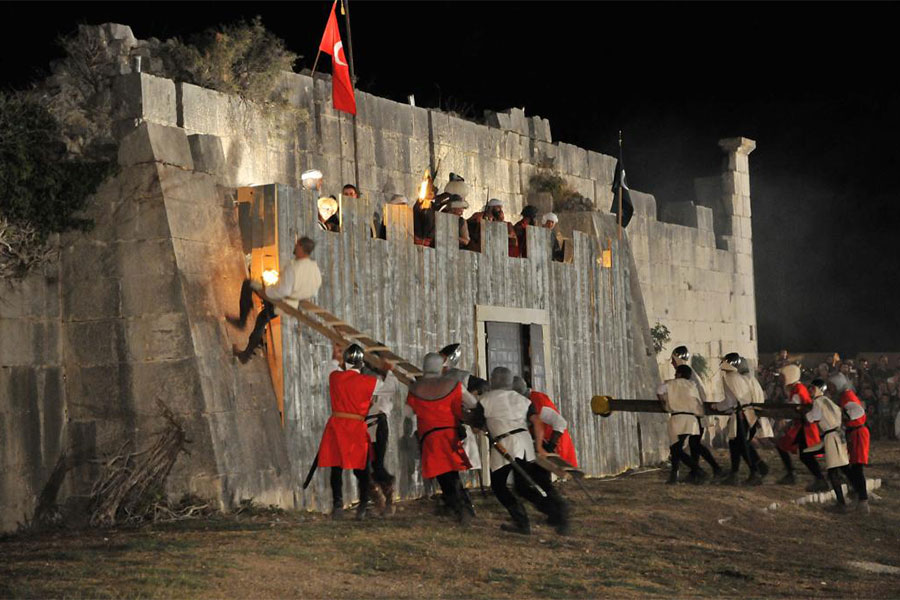 In Vrana, nearby Pakostane, there is a han of Jusuf Maskovic, more known as Maskovica Han. It was supposed to be a summer residence and the residence of the high dignitary in the Turkish court, Jusuf Maskovic, a native of Vrana, who ordered its construction in the 17th century. The construction began at the beginning of the War of Candia, and, because of Maskovic's death, it was never completed. Maskovica Han is special because of the fact that it is also the westernmost monument of the Turkish architecture in Europe.

Today it is a tourist attraction of the Pakostane Riviera. During the summer season, in the last weekend of August, the manifestation “Days of the Vrana Knights” is held, which brings to life the old times. With a wide range of medieval foods and drinks from this region, you can also meet the Knights Templar, the Turkish pashas, papal messengers, priors of Vrana, and many others, who are competing in the tournaments and competitions. 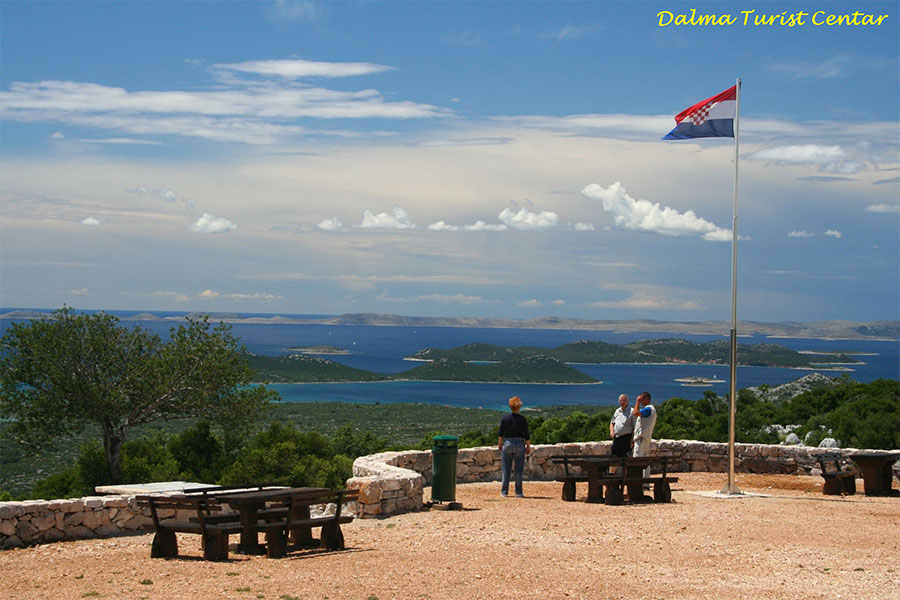 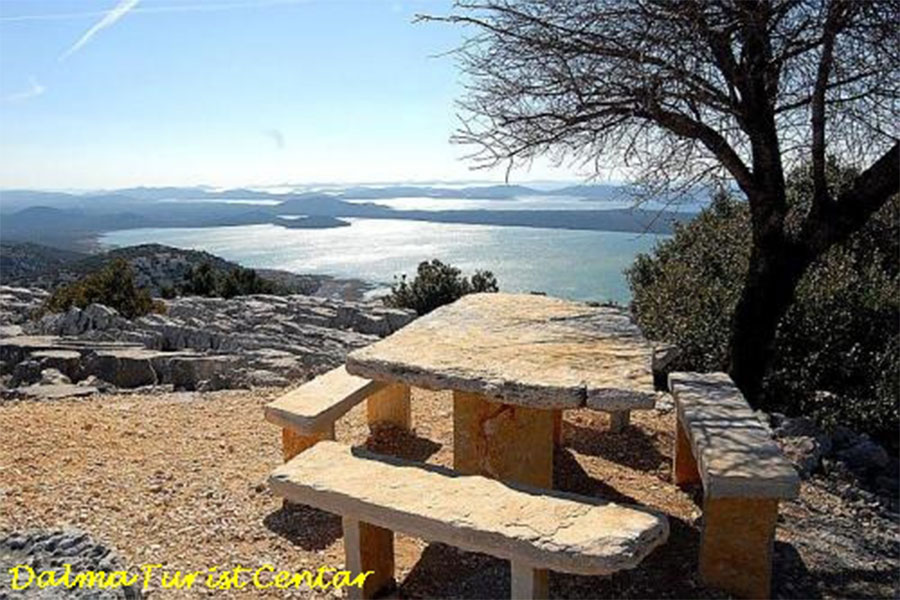 At the top of the hill Kamenjak, above the middle of the Vrana Lake, is a decorated viewpoint of the same name. Viewpoint Kamenjak is located within the Vrana Lake Nature Park, and offers a beautiful view of the entire lake, Pakostane, Drage, Murter and Kornati islands.

Two connected buildings were built and decorated in a traditional style. There are information boards next to them, that tell the story of this region, which is older than two millennia.

The viewpoint can be reached by road. 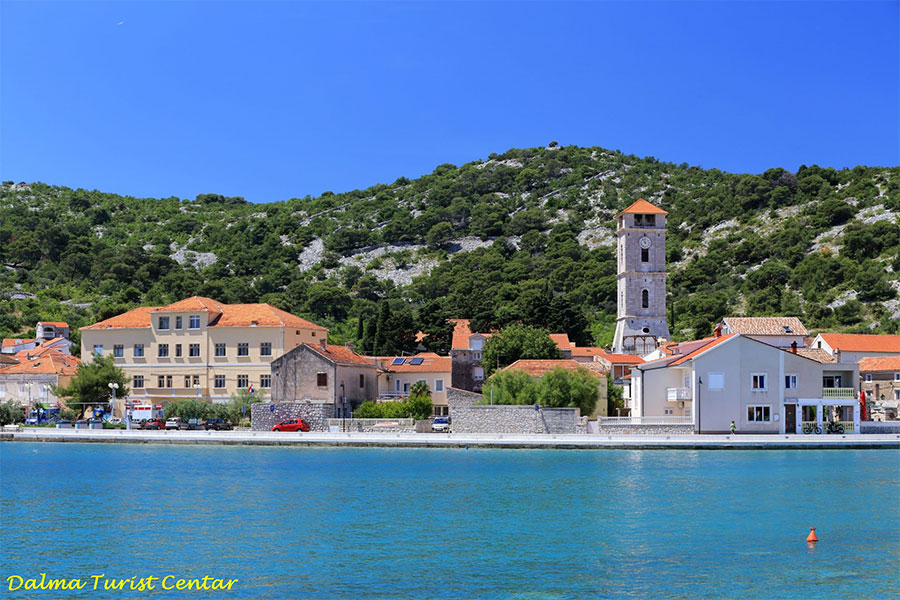 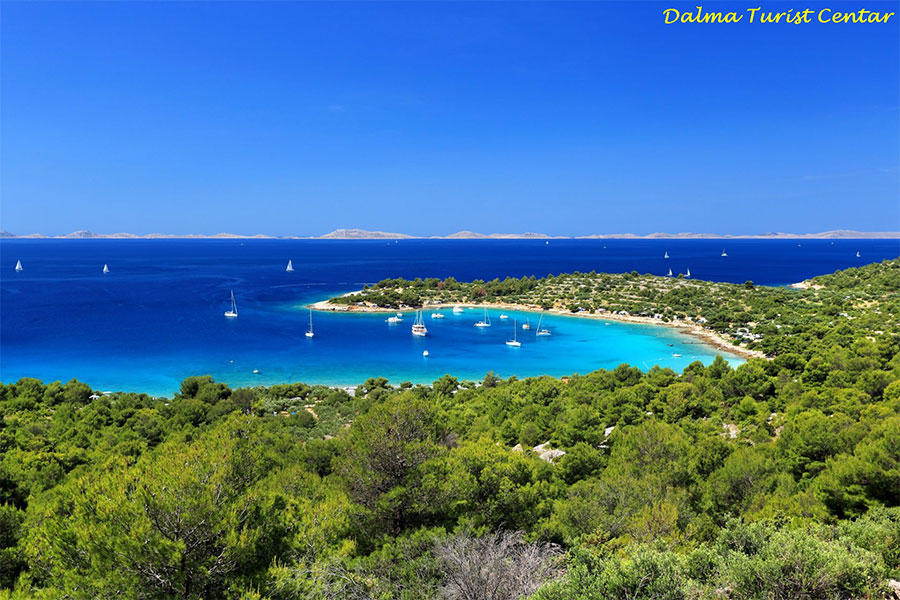 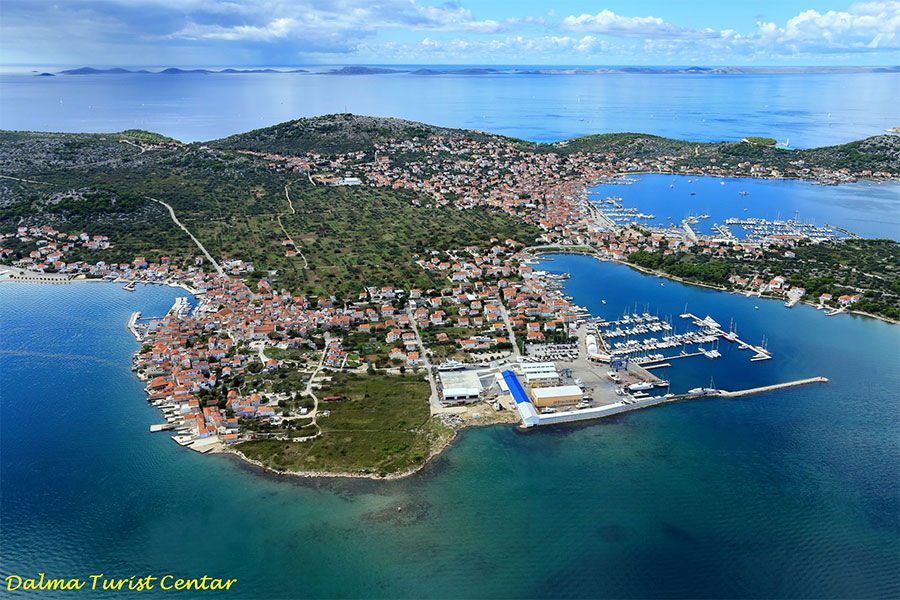 The island of Murter belongs to the North Dalmatian group of islands, which is the most dense archipelago in both the Adriatic and the Mediterranean, and contains almost 40 % of all Croatian islands.

Murter island is adorned by 189 islands, islets and cliffs.

It is located in the northwestern part of the Sibenik archipelago and Sibenik - Knin County. The island is connected to the mainland by a short bridge in Tisno, and it is known for its beautiful sandy, and pebble, beaches. There are four towns located on the island: Murter, Jezera, Tisno and Betina. 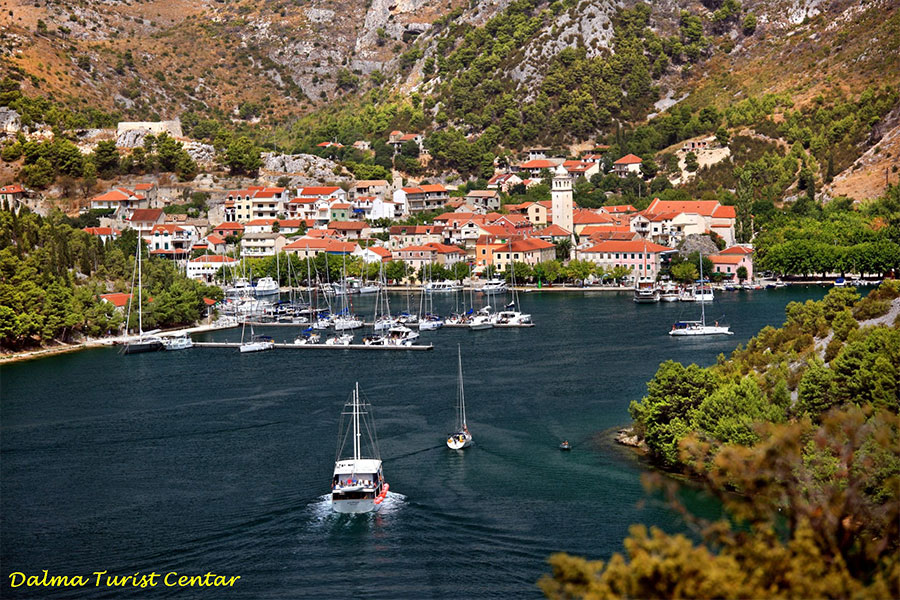 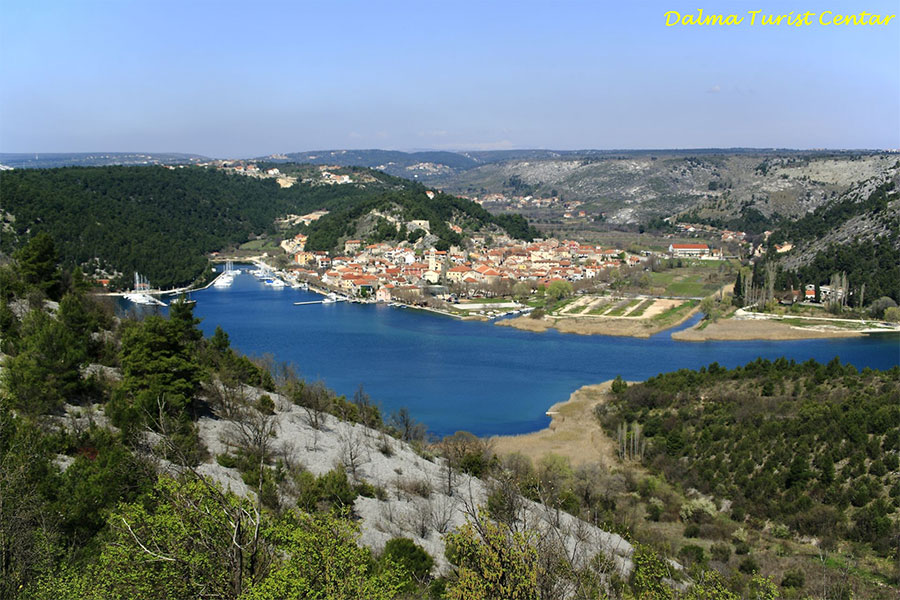 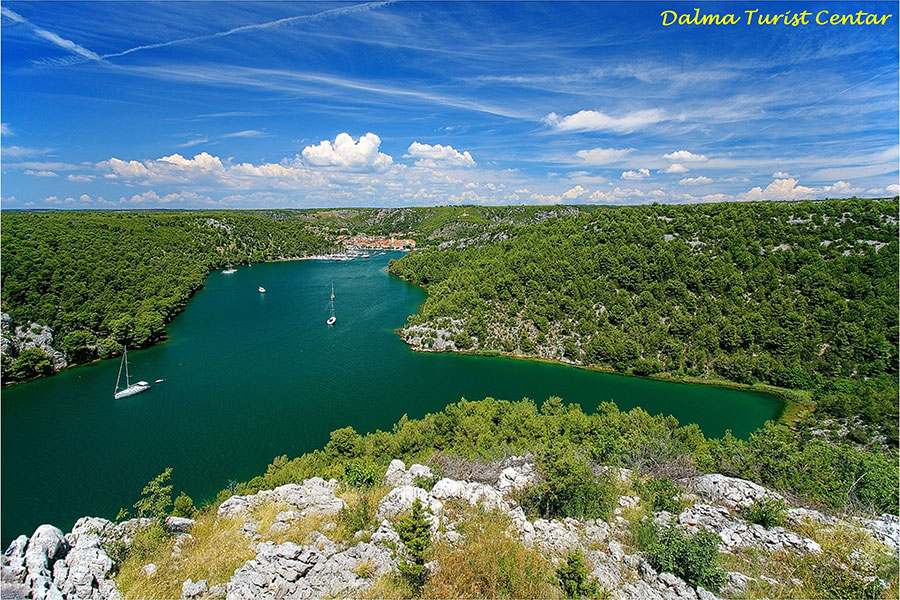 Skradin is a small town on the right bank of the river Krka. It can be reached by car or boat. There is also a renowned ACI marina and the entrance to the Krka National Park. From there you can visit the attractive Skradinski buk, Roski waterfall, and the Franciscan monastery Visovac, on the island of the same name.

What makes Skradin recognizable is the Church of the Nativity of the Blessed Virgin Mary and its nearby bell tower, as well as the towers of the Church of St. Spiridon. Close to the town, there is the archaeological site Bribirska glavica, which makes an excellent combination of nature and ancient buildings.

In addition to the numerous historical sites, this city can boast with excellent cuisine, and with the bathing area where the river water meets the seawater.

If you have any questions about our services or you want to book accommodation, then simply send us an e-mail or call us at the phone numbers below. 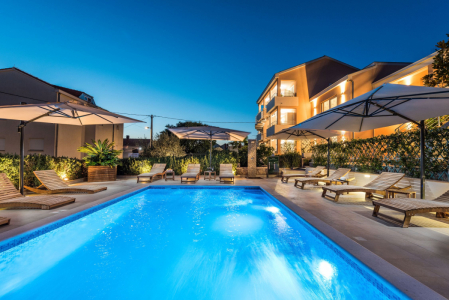 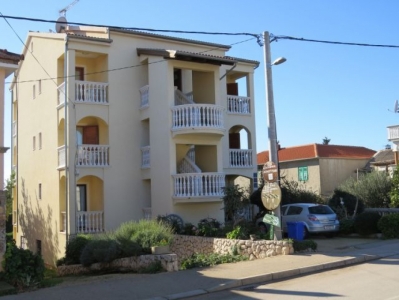 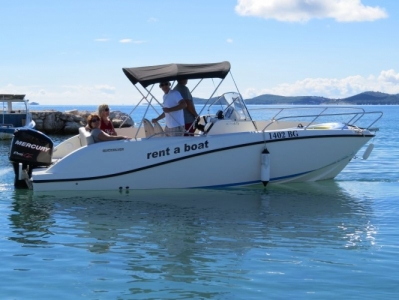 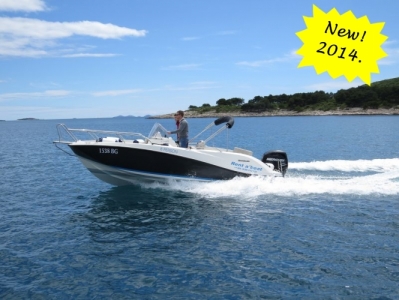 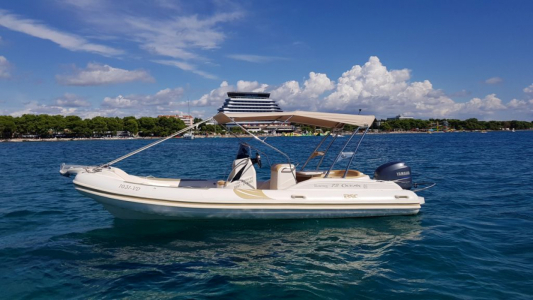